This area of research incorporates studies of both modern and ancient coral reefs.
Through the study of the geomorphology, sedimentology, stratigraphy, palaeo‐ecology
and geochemistry of reefs we address fundamental questions about the Earth’s
natural systems. Sydney Uni’s One Tree Island Research Station in the Great Barrier
Reef is a common field trip destination. Research themes include:

This research theme is focused on understanding the main factors that influence coral reef and carbonate platform evolution, across variety of spatio-temporal scales. Off NE Qld we have shown previously that the Great Barrier Reef “died” at least six times in the last 300-500 ka and has been able to re-establish itself as many times over this period despite major climate changes. More recent work in the GRG has focused on understanding the development of the GBR on millennial

times scales with a new ARC-supported project currently in progress  investigating the Holocene and Pleistocene evolution of the GBR. We have also extending this work to different tectonic settings in Papua New Guinea and Hawaii, where have generated new conceptual and 1D, 2D and 3D numerical models accurately showing how reef and carbonate platform evolution are controlled by changes in sea level, subsidence and growth rates. 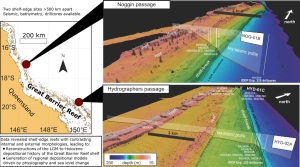 This research theme is focused on a largely unexploited nature archive – submerged coral reefs. Our group has pioneered the practice of using submerged coral reefs across the Indo-Pacific as accurate sea level and paleoclimate proxies. For example, work in Hawaii established critical constraints on the timing and magnitude of meltwater pulse 1A, a dramatic, global jump in sea-level associated with catastrophic ice sheet collapse. In the past 10 years, GRG, in partnership with our collaborators, has built an international recognized program of research in this theme with new investigations of drowned reefs in Tahiti, the Great Barrier Reef and the Western Australian shelf and further work in  Hawaii. These projects are linked to several large international research programs including the Integrated Ocean Discovery Program (IODP) which is focused on recovering sediment cores (Exp. 310 – Tahiti; Exp. 325 – GBR; 716-Full2 proposal – Hawaii) from the sea bed to understand past sea level and climate changes and reef response. 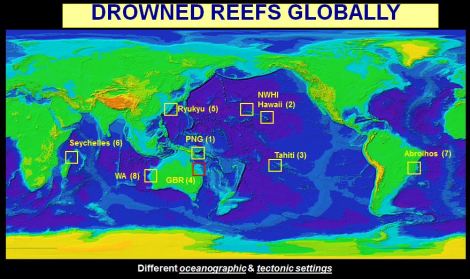 Integrating new age, bathymetric and reef modeling constraints, this work provided new insights into the lithospheric dynamics of foreland and hotspot settings. We have generated a new

tectonic model relating the overlying thrust mass and spatial variations in the flexural rigidity of the underlying lithosphere to explain regional-scale platform tilting in PNG. We also reconstructed the first independent history of vertical motions of the Lanai and Molokai confirming their stability and the likely occurrence of mega-tsunamis in the islands. Comprehensive analysis all the drowned reefs in the Mau Nui Complex has constrained the tilting of the reefs in response to lithospheric flexure associated with sequential volcano growth and northwest plate motions.