What do a group of scientists do when they get stuck on a boat in the middle of a reef???… measure everything they can!!!

Last year Steph Duce was part of a group of researchers led by Dr Sarah Hamylton from the University of Wollongong. They went on an expedition to the Capricorn Bunker Group in the Southern Great Barrier Reef on board a 30 foot sailing catamaran.

Almost as soon as they left port in Hervey Bay, heading north to Lady Musgrave Reef, the weather turned bad. 35 knot winds and 3 m swells made for an unpleasant night of sailing during which one of the two motors broke down. By morning they limped into Lady Musgrave lagoon and, thankful for the protection of the surrounding reef, inspected the motor. The problem turned out to be beyond the abilities of even the resourceful skipper (Captain Russ, Scourge of the Capricorn Group). The only option was to have new parts flown in by sea plane! But given the bad weather had set in, that couldn’t happen for a few days.

There they were, marooned! But with 2 small boats, underwater cameras, GPSs, pressure transducers, lots of sample bags and 4 eager scientists on board they made the best of it! They took sediment samples, underwater video and pictures to ground reference satellite imagery, they also took a few hydrodynamic measurements… and then Sarah led the publication of this paper which has recently been accepted in Sedimentology with the collaboration of GRG members Steph Duce and Ana Vila-Concejo.

If you want to find out more about the Voyage, and what happened after they left Lady Musgrave, watch this short YouTube clip: https://www.youtube.com/watch?v=HcBjRvcmpKk 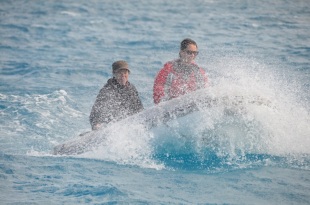 Strong winds and swell made work conditions rough even in the lagoon! Photo: Chris Roelfsema, UQ

It’s not all fun and games, sea sickness takes its toll on Steph and Rafa! Photo: Chris Roelfsema, UQ

Rafa Carvalho from UoW making friends with some locals once we were underway again. Photo: Chris Roelfsema, UQ

Steph is boat person while Chris does snorkel photo transects. The orange bouy carries the GPS so the photos can be linked to the location they were taken. Photo: Chris Roelfsema, UQ