Rivers are complex and dynamic systems that form vital link between the continents and surrounding marginal depositional environments, shaping the location and geomorphology of the coast in their path. River behaviour changes through time, with the morphology and character of a river at a particular time and place being a consequence of complex interactions between hydrology, sediment load, geologic setting and geomorphic history. Riverbank erosion and instability are examples of complex river behaviours and form key research areas of this group.

Riverbank collapse is a well-studied phenomenon in Australian and overseas river systems, commonly occurring during high flows and flood conditions. Large scale and widespread collapse of riverbanks along the lower Murray River South Australia occurred unconventionally during the peak of the Millennium Drought (2008-10) when pool levels were -1.05 metres AHD below sea level. The lower Murray is unique in its ability to fall below sea level during periods of low flow due to barrages blocking seawater ingress at the Murray Mouth.

Project E.1.8 ‘Riverbank Collapse in the Lower Murray River’ is supported by The Goyder Institute for Water Research and in collaboration with Adelaide University and Professor Dave Petley of the University of East Anglia, UK. This research aims to explore the failure mechanisms and potential triggers driving collapse events through geological, bathymetric and geotechnical testing of the alluvial riverbanks and subsurface river channel sediments. They aim to develop an enhanced understanding of the bank failure process, its geological and geomorphic context, and the potential for re-occurrence which will facilitate the management of this hazard. 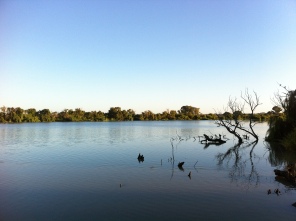 A calm morning on the Murray

Working off the houseboat late into the night at Bells Reserve, Monteith

Another focus of research into river systems deals with the influence of riverside vegetation on the occurrence and progress of stream-bed and river-bank erosion. Recent riparian management practice in Australia has focused on re-establishing and maintaining native riparian vegetation in order to control erosion and regenerate or preserve the complex variety of in-stream and riverside habitats. Recently completed projects have validated this approach and identified the roles of vegetation placement and type that must be considered to ensure best practice in riparian management. 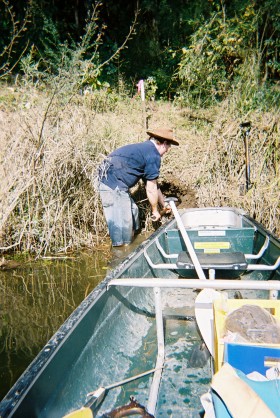 Tom Hubble and his trusty canoe 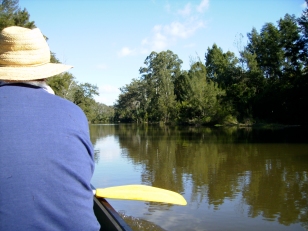 Contemplative paddling whilst on the lookout for collapses