This week two members of the Geocoastal Research Group, Tom Hubble and Samantha Clarke, presented at the 2014 Australian Earth Science Convention (ASEC) held at the Newcastle City Hall from 7th-10th July 2014. The AESC conference bought together a large number of active researchers and industry members from many areas of the geosciences field and represented a unique opportunity to showcase to both the national and international scientific community some of the work carried out by the Geocoastal Research Group.

Tom presented a talk titled “The ‘Lake Mannum’ Muds: a lacustrine origin for the lower Murray River gorge’s uppermost valley fill” to a well-attended crowd in the Hunter Room, despite having the slightly unlucky “last talk of the conference” time-slot!

Samantha presented a poster titled “Morphology of Australia’s eastern continental slope and related tsunami hazard” and was awarded the ASEC Best Poster Award. Samantha was also received a Postgraduate Bursary Scholarship from the Australian Institute of Geoscientists (AIG) to help attend the conference and sends her sincere thanks to the AIG for their generous support. 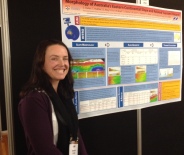 Overall, a fantastic conference and a great chance to see what new and exciting things are going on the field of Geosciences in Australia. Looking forward to Adelaide in 2016!