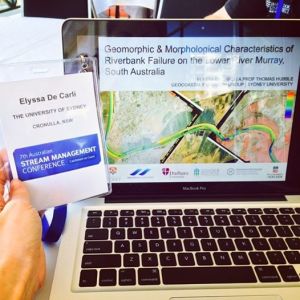 Last week Tom Hubble and Elyssa De Carli attended The 7th Australian Stream Management Conference (7ASM) in Townsville. Tom presented a talk entitled “Geomechanical modelling of the Murray’s Millennium Drought river bank failures: a case of the unexpected consequences of slow drawdown, soft bank materials and anthropogenic change”, and Elyssa presented her talk entitled “Geomorphic and Morphological Characteristics of Riverbank Failure on the Lower River Murray”. Both presentations were well received by a scientific, industry and government agency audience, and are based on research into large-scale mass alluvial failure which occurred on the lower Murray River, unconventionally during the peak of the Millennium Drought, funded by The Goyder Institute for Water Research.

The conference also had some noteworthy keynote speakers such as Bob Katter (whom gave an ‘interesting’, theatrical and abrasive rant about what I’m still not sure), and more notably Donna-Marie Audas from The Great Barrier Reef Marine Park Authority (GBRMPA) and Kelly O’Shanassy CEO of The Australian Conservation Foundation (ACF), whom both gave inspiring and empowering talks on the work being done on a catchment based scale to protect reefs of the GBR, and the work communities and individuals are doing for the advocacy of a healthy and sustainable environment respectively.

The sessions highlighted work and research currently undertaken in our urban and rural based catchments and river systems. Some presenters to note include; Ian Rutherfurd, Andrew Simon, Geoff Vietz, Wayne Erskine, Anthony Ladson, Ross Hardie, James Grove, Ivars Reinfelds, Ben Berry and Hugo Bowman. It was an enjoyable and informative conference and some good contacts were made for possible future collaborations. Looking forward to 8ASM!